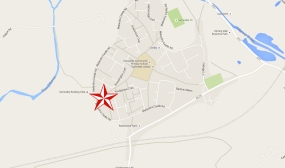 High in the hills above Manchester – close to Glossop and Hadfield is the Gamesley Estate.

Created in the late 1960’s by Manchester City Council, to alleviate city centre overcrowding and perceived poor housing and environmental conditions – one of many so-called overspill estates.

It feels remote and uncared for, there is little by way of employment, few if any diversions. The public amenities have a bunker-like quality and local shops run down to almost nothing.

There were two pubs built to accommodate the newcomers – both are now closed.

That includes The Centurion – named for its proximity to the Melandra Roman Fort.

But they’ve been and gone, an invasion from within, local behaviour has defeated the local.

“A couple of drinks and they wanted to fight the world, you could hear it streets away.”

A group of Rumanian workers, based in West Bromwich, are stripping out the interior the morning I arrive.

It’s going to be a shop.